Miramar has three underexplored gold projects near Kalgoorlie in Western Australia – Gidji JV, Glandore and Randalls. All have excellent access and are well positioned in relation to existing mining and processing operations. 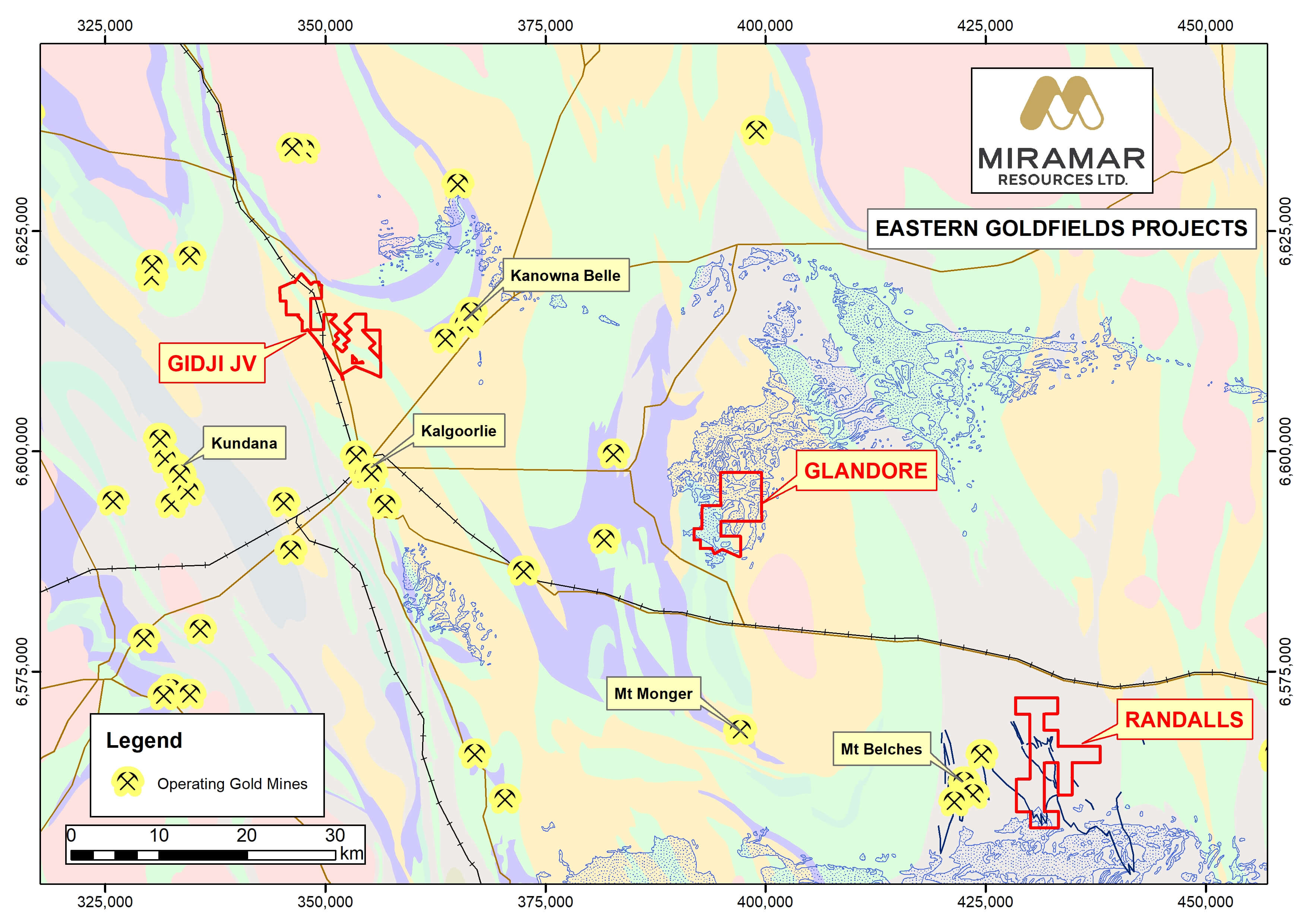 The Gidji JV Project is located within the Eastern Goldfields approximately 14km north of Kalgoorlie. Miramar purchased an 80% interest in the Project as part of the 2020 IPO.

The Project has a number of tenements located along a major structure, the Boorara Shear, which hosts gold mineralisation at Paddington approximately 10km along strike to the north. The project has been well covered by historic drilling and auger sampling, but most holes are less than 60m deep. A significant dilational jog is seen in the Boorara Shear within the project tenements which has been poorly tested with drilling.

Marylebone is currently the highest Priority target at Gidji as its geology, structure and scale are similar to the 10Moz Paddington deposit and where Miramar discovered high-grade gold in a quartz vein. After four aircore programmes of relatively wide-spaced holes, the Marylebone footprint is currently about 2km long and still growing. The Company is progressing ground magnetics, RC drill testing, extensional/infill aircore drilling and follow up RC/DDH testing at this target as well as extensional/infill aircore drilling and bedrock RC drill testing at its Piccadilly, 8-Mile and Railway targets. The aim of the next aircore drilling campaign in Q4 2021 will be to refine targets for RC drill testing in early 2022. Additional granted tenure at Gidji in September 2021 included a number of highly prospective and under explored targets such as The Jog, Claypan and Lake.

The Glandore Project is located within the eastern Goldfields, approximately 40km east of Kalgoorlie, Western Australia. The Project covers approximately 42 square km and consists of 10 Prospecting Licences and one Exploration Licence, all of which are granted.

The highest priority western part of the project is underlain by a layered mafic sill intruding into basalt and sedimentary rocks. The dolerite sill comprises various varieties of dolerite and gabbro analogous to the Golden Mile Dolerite. 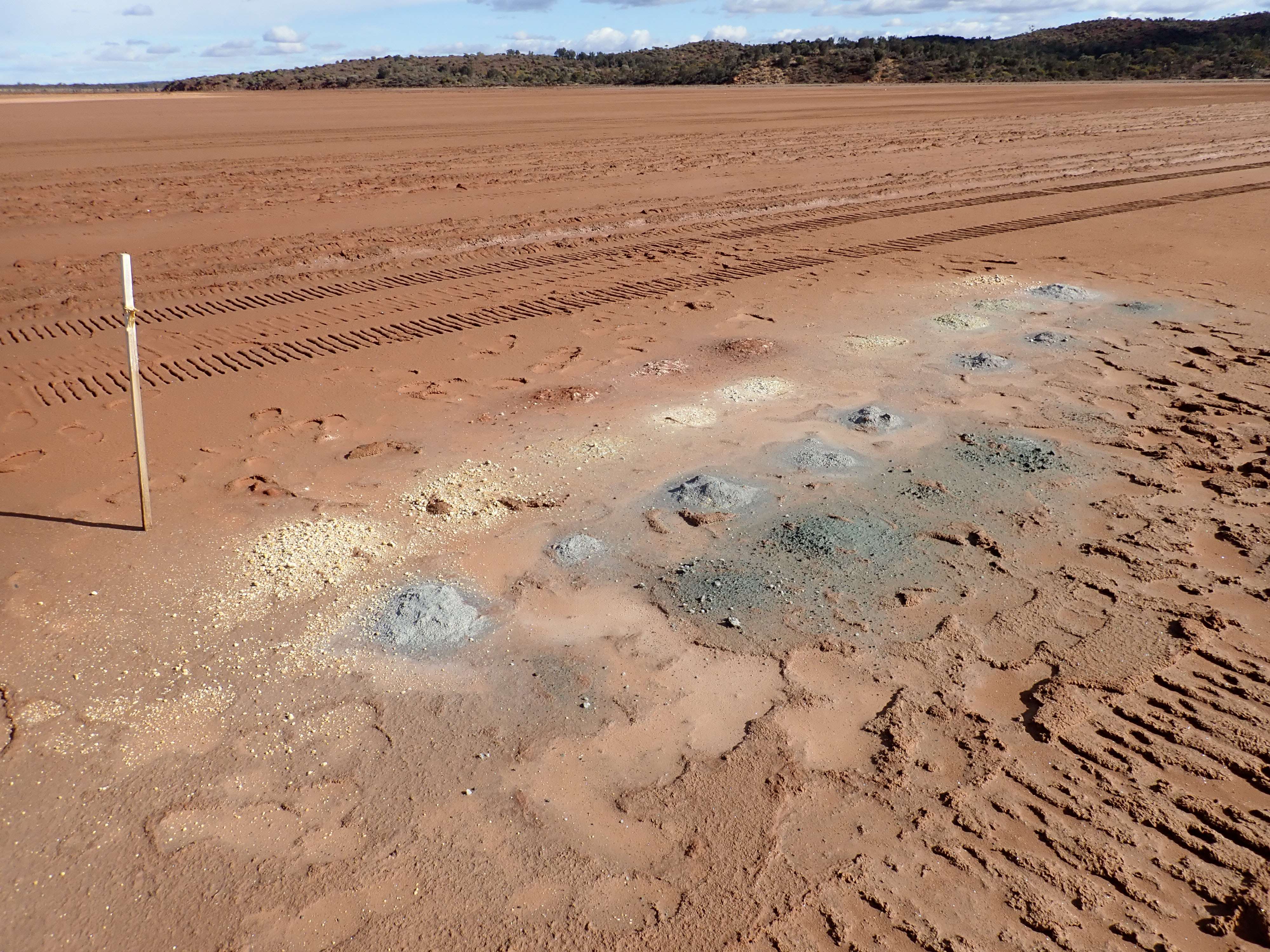 The highest priority western part of the project is underlain by a layered mafic sill intruding into basalt and sedimentary rocks. The dolerite sill comprises various varieties of dolerite and gabbro analogous to the Golden Mile Dolerite.

The local geology has been folded into a north-plunging antiform with the Project located on the eastern limb, southeast of the hinge zone. The antiform has been intruded by a granodiorite and felsic porphyry dykes.

The prospective geology is overlain by up to 50m of recent playa lake sediments which thin towards the west.

Exploration has been mostly limited to the western part of the project, within the Prospecting licences, and has been sporadic since the late 1980’s.

Drilling has identified mineralisation over approximately 2.5km of strike within the folded mafic package, associated with quartz-pyrite veins and ankerite-sericite-pyrite alteration.

Miramar’s aircore drilling south of the lake has outlined a 600m long anomaly >0.25g/t Au and up to 1m @ 9.34g/t Au. Lake drilling has also been completed with assays pending.

The project covers extensions to the folded Banded Iron Formation (BIF) and sediments that host the gold mineralisation currently being mined by Silver Lake.